How to tell your life story at a job interview 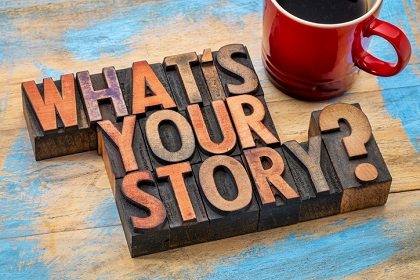 The interview’s tomorrow and you’ve done your research. You know everything about the company, from its mission statement and culture to the challenges posed by key competitors. You know its story. But aside from the resume you sent in, what does the company representative who’ll be conducting the interview actually know about you? At best, you’re an impressive collection of degrees and skills and positions formerly filled – like every other applicant. In other words, you’re a mostly unknown commodity. And that’s why you need to be prepared to let them know your story. Too many people overlook the importance of crafting a coherent description of the stages in their lives, tailored to illustrate their characters and values and, by extension, the kind of employees they would make. That’s a mistake. You need to be prepared, in any job interview, to provide a compelling narrative about a highly relatable character with whom the interviewer can identify: yourself.

Here are five tips on how to construct your own personal narrative:

1. What’s it all about? Identify the main themes of your story

People like causality. They like to know that this happened because of that – and not that everything is a meaningless series of unlinked episodes lacking any sense of continuity. Examine your life and establish a list of key events or stages that have caused you to be who you are, and note how these stages are linked. Look for the overarching themes of your life. Some examples: the importance of family; the value of perseverance; the journey of self-discovery. Every life will have different themes. And the easiest way to find the main themes of your life is to…

2. Identify the particulars: people and experiences

When constructing your personal narrative, think of particular people and events that helped you to become the person you are today. These will illustrate the major themes of your story. For instance, if you’re pursuing a career in programming, you might recount a story about an instructor who inspired and encouraged you – or maybe you can remember the first program you ever wrote, the sense of delight and accomplishment you felt, how it solidified your desire to delve deeper into the world of coding. Think up as many significant moments as possible – not because you’ll have time to recount them all in an interview, but because not all of them will be relevant. Which brings us to the next point…

3. Tell the stories that fit the job

If you’re interviewing for a position in sales and you’re asked about interests or hobbies, discard the story about how you spent countless solitary hours hunched over a desk unsuccessfully working out a unified theory of everything, and focus instead on what you learned about yourself and your fellow human beings when you were a member of your university’s dragon boat team: the comradery, the competition, the desire for victory. Always tailor your stories to fit the job. Never lie, though. Just keep a variety of stories catalogued in your mind – and choose wisely.

4. Be the author of your own destiny

Except when you’re describing mentors who’ve positively influenced the course of your life, strive to present yourself as an active character, one who faced problems, made decisions, acted and succeeded. The fact that you may be looking for a new job because you were laid off from your old one due to cost-cutting measures isn’t going to make you a compelling character in the eyes of an interviewer. Avoid recounting stories in which you seem simply the victim of circumstance – someone in the wrong place at the wrong time. You want to inspire confidence, not pity. That’s why you need to…

5. Know the moral of your story

Know why you’re telling a particular story: the point it’s meant to illustrate about you and your values. If, during an interview, you admit that you’re actively seeking the position with Company B because Company A, where you’re now working, doesn’t even pay half of what Company B is paying, you’re basically saying that, in your opinion, greed is good. And, while there may be sectors in the economy where such a sentiment might be encouraged, it’s generally not a good idea to highlight that as one of your primary beliefs. Instead, focus on stories that show how you value positive attributes like dedication, loyalty, personal and professional development, and a strong team spirit.

It might take some time and practice to work out your story, but if you want people to identify and engage with you meaningfully, it’s absolutely necessary. Doing so will not only help you to shape the perceptions of potential employers, but will also give you a greater sense of confidence because you’ll have a clearer sense of who you actually are. And that’s when you can truly control the narrative.

Written by Gordon Young From Workopolis.com

Ask a Question View Our Job Board Create a Candidate Profile

If you are a Business looking for solutions to your Staffing needs, be it a Single Hire for a difficult to fill position or Staffing support of your Contingent Work Force....
YOU CAME TO THE RIGHT PLACE