How to stop micromanaging 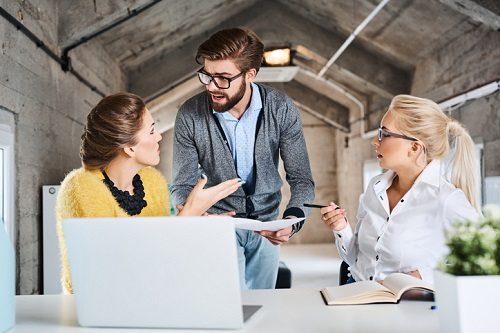 Imagine overhearing two employees complaining about someone else.
How they insist on holding meetings every morning even though they’re mostly unproductive.
How they send so many emails that they wonder how they ever have time to accomplish their own tasks.
How they request so many updates on Project X that they feel paralyzed to make any decisions on their own.
But…wait a minute. You’re the one who assigned Project X. They’re talking about you.

It takes a great deal of self-awareness to realize you’re micromanaging, but there are telltale signs to look out for – and the above situation only touches on a few of them.
Do you meet with your people more than once a day? When you meet with your reports, are you asking to see their to-do lists rather than asking what you can help with? If any of these signs ring a bell, it might be time to take a step back.
First things first: don’t be worried that you didn’t see your micromanaging ways – most don’t, says Nancy Milton, a coach who helps employees and executives boost their leadership and communications skills.
She adds that you may not be to blame. Since management tends to be a skill many pick up informally, you may have had role models that led you to believe that micromanagement is natural – and it’s become the only management style you know. Or, if you’re new to a role, you may be unconsciously using micromanagement to cover up a lack of self-confidence or fear. It could be a bad habit that’s become ingrained. No matter the cause, there are ways to reprogram your approach.

If you can’t imagine how to do things differently, start by educating yourself on new management techniques.
Milton recommends the book Change your questions, change your life by Marilee Adams to help you start asking more open-ended questions of your reports. You could also seek out a leadership course, training with a coach, or mentors that seem to be able to rise above micromanagement.
“Look around your office to find people who are great leaders and ask them about the steps they took,” says Milton.
An even more radical step is admitting to your reports that you see the problem, says Milton.
“If I genuinely cared if I was micromanaging, I’d say ‘on a scale of one to 10, how independently are you able to work in this job? On the same scale, how satisfied are you with the level you’re able to make decisions in your role?’”
If just thinking about their feedback makes you break out in hives, consider simply acknowledging to your team that you want to change your ways – but more on that in step two.

Ultimately, the goal is to empower your employees to make their own decisions and take the lead on projects rather than waiting on you for guidance.
But like many goals, Milton says breaking the approach up into small steps can be important to success. Rather than expecting to change overnight, setting weekly and monthly goals can be effective.
Start by letting your team in on your goals. “Say, ‘hey team, I recently received feedback that I’ve been micromanaging, my goal is not to. Here’s what I will be doing to work on unwinding the habit, and if at any point I tell you anything that sounds like micromanagement, you can just indicate that by communicating the symbol MM for micromanage.  You have my word that I won’t question you back, get defensive, give excuses, but instead thank you and ask questions,’” advises Milton.
Your first week might be just noticing when you ask closed questions that don’t involve your employees. The second week might be making an effort to flip your closed questions into open questions.
“As a leader, I want to be asking, ‘We’ve got 30 minutes, what are three key things that we can cover?’” says Milton.
In other words, delegating and empowering people to make decisions themselves rather than coming to you is part of letting go of control.
“Micromanagers do the reverse, they don’t give people enough bandwidth or leash to make decisions on their own,” she says.

How to keep temporary employees productive

The “blended workforce,” an ongoing combination of permanent and temporary employees, is fast becoming a norm in the modern workplace. Short-term hires can be a huge advantage to small businesses looking to stay flexible during peak periods. But they can also bring new challenges to the team...

5 benefits of Partnering with a Staffing Agency

If you are looking for staff in today's labour market it is most likely you are experiencing a shortage in qualified candidates. There are many self-help hiring tools to assist you with this task on the market today such as but not limited to Print advertisement, Job board, Company website, etc....

How to keep employee morale up in the winter

It’s a safe bet that as the temperature has dropped, so too has employee morale. No matter where you are in Canada, you’re probably facing some combination of snow, slush, frigid winds, gloomy skies, salt-encrusted shoes, and sunless days. And chances are, you and your employees are not all...

A lot of people shy away from the process altogether. Among workers who responded...